Acoustic impedance is the way in which the medium, through which the sound wave propagates, reacts to the movement of a vibrating surface. Vincenzo Landi, in “La linea di trasmissione, principi di funzionamento” (AUDIOreview n.104, Aprile 1991), describes it as follows:

“Radiation impedance is the ratio between sound pressure (i.e. the variation of pressure with respect to atmospheric pressure, measured in N/m2) and volume velocity (i.e. the velocity of oscillation of air particles multiplied by the equivalent piston surface of the loudspeaker, measured in m3/s) and is a complex quantity, composed of two real quantities: the radiation resistance, which is responsible for the effective transmission of acoustic power (and therefore for sound generation), and the radiation reactance, which, while not generating sound, takes into account losses due to the inertia and elasticity of air particles”. 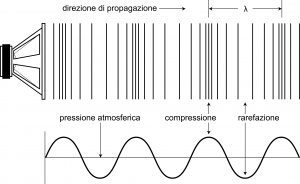 The acoustic impedance of the air is the main element to be taken into account when designing an acoustic system. A vibrating surface, for example the cone of a loudspeaker, transfers energy to the air. Due to the radiation impedance, only part of this energy is dissipated and converted into sound, while the other is temporarily stored in the oscillating air particles and then returned to the generator. In this respect, as can be seen from the illustration, the behaviour of air is not too dissimilar to that of a spring with very small mass and high compliance. This phenomenon is at the base of the dynamics that determine the behaviour of a transmission line, and it is precisely the acoustic impedance that sees the cone of the driver, both on the front and on the rear face, what is mainly represented with the circuit model that is the subject of the following articles.