Analogies are often used in electronics, mechanics and acoustics, but also in other areas of engineering, such as hydraulics, to describe a system using models derived from another physically different system. Their use is particularly useful in the study of mixed systems, i.e. made up of components of a different nature; it is therefore easy to understand how useful they can be when applied to loudspeakers: complex systems that transform an electrical signal first into mechanical force and then into acoustic pressure.

For an analogy to work it is necessary that the equations underlying the physical phenomena it describes are formally similar. A very intuitive example is represented by the similarity between Ohm’s law and the equation that relates the force applied to a body with its speed and the mechanical resistance (friction) it opposes to movement:

Impedance analogy, as shown in the example above, is based on the equivalence between force and electrical voltage to define the potentials and between velocity and electrical current for flows. This is valid for dissipative type phenomena (electrical resistance and mechanical friction) as well as for reactive type phenomena, related to the concept of mass and compliance. There is another way to relate the above described quantities keeping the formal similarity between the equations and it is represented by the mobility analogy. The table relates the main mechanical and electrical elements with the type of analogy used. Note the apparent similarity between the mechanical symbol and the relative electrical symbol in the mobility analogy. 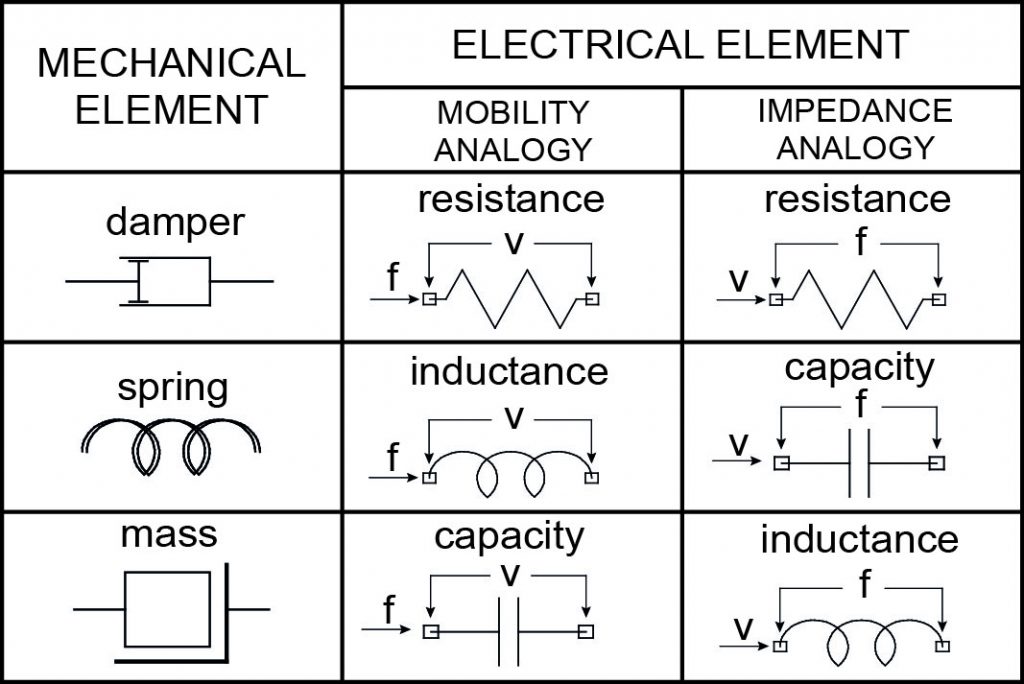 A circuit simulator is very useful in the study of a physical system because, once the model has been designed with the principle of analogies, the program itself will solve the equations and give us a correct representation of the phenomenon. Moreover, we should not underestimate the possibility of making rapid modifications to the model without having to revise a complex apparatus of mathematical formulas.