The Speed of Sound in the Transmission Line Pt.2

The first choice to make when designing a transmission line is the type of material that will be used to dampen the duct. The results of Bailey and Bradbury, related to the properties of long fibre natural wool, have greatly influenced TL builders who, especially at an amateur level, still tend to favour this material of organic origin. Alternatively, other materials with similar acoustic characteristics but better stability over time (and absence of unwanted odours) such as Dacron or Acousta-Stuf are often used.

One of the purposes I had set myself during my TL research was to test the properties of some non-fibrous materials as an alternative to what has just been described. I had high expectations about a material with a honeycomb structure, based on polyethylene foam, which were unfortunately disappointed. The acoustic behaviour was not too dissimilar to that of the fibre, but the vibrations of the material caused a well perceivable noise at the outlet of the duct. So I started experimenting with foam and the results were as surprising as they were unexpected. I had already verified the influence of the Dacron on the speed of sound using my test line. The method suggested by Joseph D’Appolito in his Testing Loudspeakers for this type of measurement is to display on a linear scale, in a frequency range where the SPL graph is quite regular, the slope of the excess phase. The latter, measured in degrees/Hz, if converted to rad/rad/sec, simply dividing by 360, has the units of time. Clio Pocket does not allow me to display response measurements on a linear frequency scale and this makes it impossible to locate a section of the graph with a constant slope (straight line section) corresponding to a pure delay. The method I used therefore operates in the time domain and consists in measuring, by means of the impulse response, the time taken by the sound wave to travel the length of the line. The setup is visible in Figure 5. 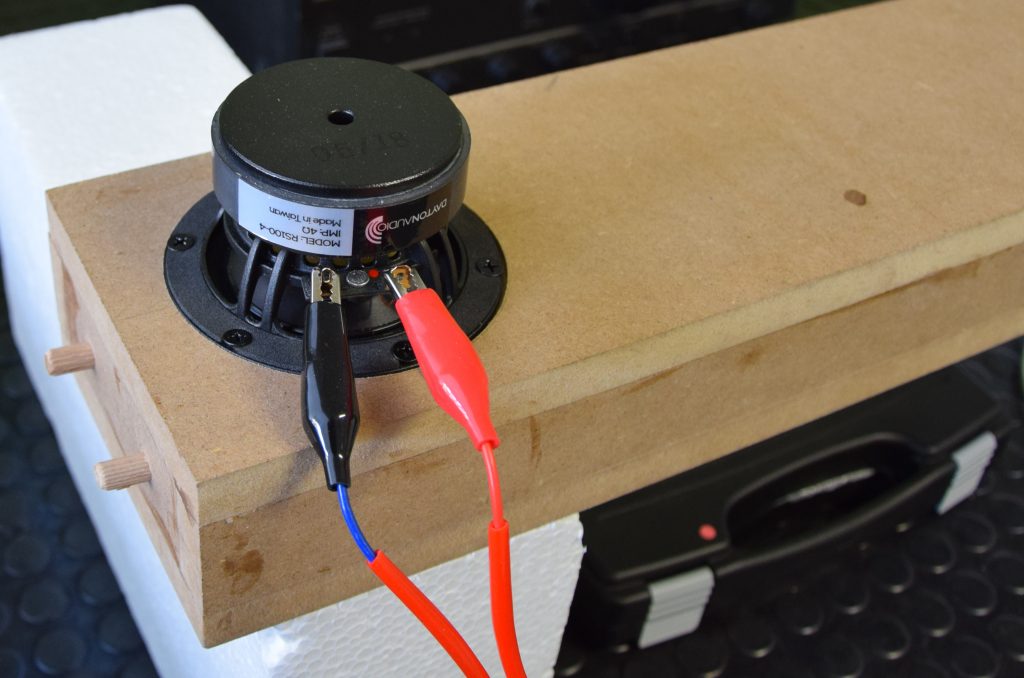 I stress that, since the impulse contains all the frequencies, from this type of analysis we cannot in any way evaluate the eventual variation of the speed of sound as a function of frequency.

The loudspeaker is mounted on the test line (1 meter long) with an offset of 5 cm. Given the small diameter, the cone is assimilated to a point source; the length I have taken into consideration for the measurement is therefore 95 cm.

A measurement of the empty line (Fig. 6) confirms that the setup is correct: the impulse arrives after 2.75 ms; by converting the length into meters and applying the well-known formula speed=space/time we obtain 344 m/s, that is the speed of sound in air. The second peak is due to the sound wave reflection on the closed side of the line. The arrival is partially masked by the first, but it can be estimated at 3.06 ms, which corresponds to a length of about 105 cm. Those extra ten centimetres are due to the distance of the cone from the bottom of the line (5 cm), which must obviously be travelled twice.

As D’Appolito points out, deciding the arrival of the impulse from the graph in the time domain is somewhat subjective. For our investigation we do not need millimetric precision, but we can obtain further confirmation using the principles of frequency domain analysis so dear to D’Appolito. The transmission line basically represents a pure delay for the emission of the rear part of the loudspeaker and, in a pure time delay, delay and group delay coincide. Subtracting from the total delay the minimum delay, that is the stimulus response delay introduced by the loudspeaker, we obtain the excess group delay, which is just what we need. After positioning the cursor at a point where the SPL graph is horizontal, i.e. where the amplitude response is constant, we move on to displaying the excess group delay (Fig. 7).

The point identified for the measurement of excess group delay is the short horizontal stretch in the valley between the first two resonance modes of the empty line. The value of 2.75 ms fully meets expectations.

This slowdown in the speed of sound is due to the partial transformation of the type of air compression/rarefaction from adiabatic to isothermal. In adiabatic compression the pressure variations are very rapid and the gas (in our case the air) does not have time to exchange heat with the surrounding environment so its temperature rises and falls very quickly as the pressure varies. The acoustic waves in free air are a perfect example of this phenomenon. The addition of fiber inside the line prevents the rapid change of temperature and the compression becomes partially isothermal. The parameter that determines the decrease in speed is the adiabatic expansion coefficient, normally indicated by the letter γ (gamma), present in the equation of the speed of sound: 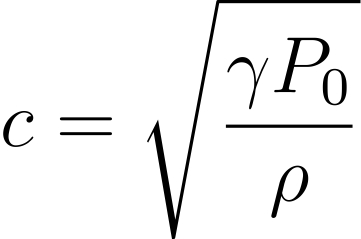 where P0 is the atmospheric pressure and ρ is the air density. For an adiabatic process γ is 1.4 and corresponds to the well-known speed of sound in air of 344 m/s (343.4 at +20°C). The lower limit of γ, under ideal conditions, is 1 and corresponds to an isothermal process. Thanks to this effect, damping materials are also used to increase the acoustic volume of traditional loudspeakers. The acoustic compliance of the air volume inside the box depends on the speed of sound:

where V is the volume of the speaker. A typical range value for a closed box filled with fibre is 1.2 and leads to sound volume increases of 15-20%.

By further increasing the foam content in the line, and if we reach a filling rate close to 80% of the total volume, the speed of sound slower to a value close to 200 m/s. It is evident that a poroelastic material like foam has an influence on the speed of sound that goes far beyond the change in the type of compression and rarefaction of air from adiabatic to isothermal. A more in-depth analysis goes beyond the aims of this work, but a rapid research in the scientific literature has led me to some studies based on Delany and Bazley’s models, which associate the speed of sound in poroelastic materials also with other parameters, such as the flow resistance, and report results compatible with what has been experimented. 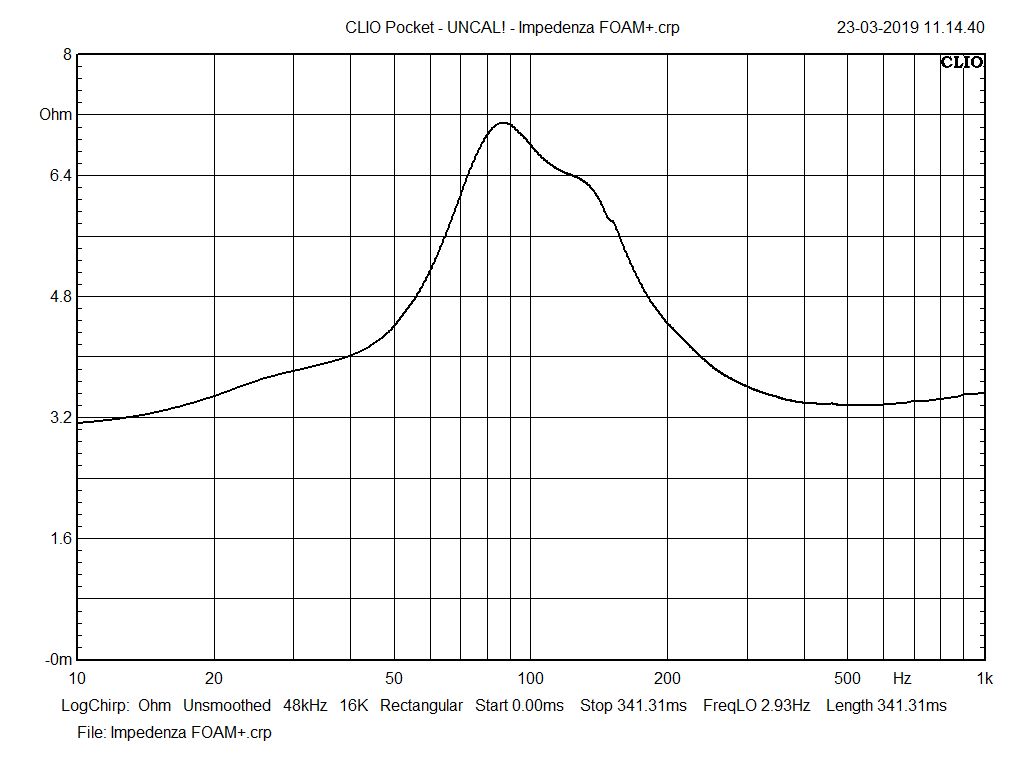 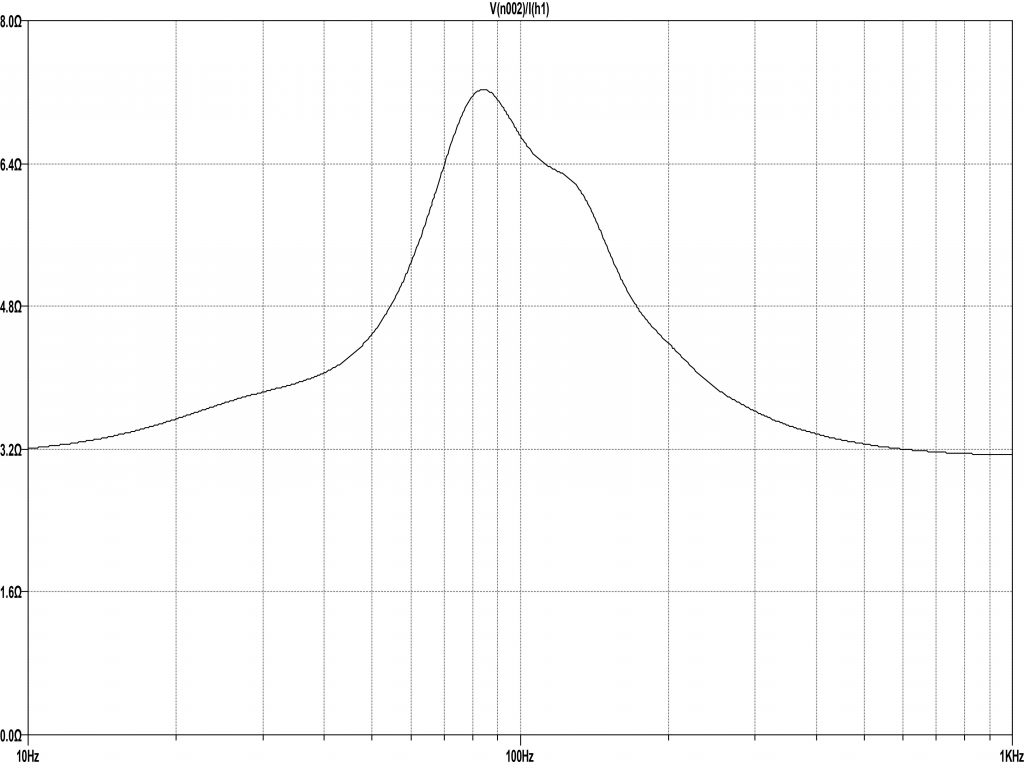 I took an impedance measurement of the line 80% filled with foam (Fig. 9a) and I ran a simulation (Fig. 9b). In setting the parameters of the simulation I usually try to recreate the real conditions by setting the speed of sound and the flow resistance according to the amount of absorbent, but in this case I only varied the virtual length of the line leaving the speed of sound equal to that in air. The impedance simulated in these conditions, incredibly similar to the measured one, corresponds to a transmission line of even double the real length. This confirms that, in a transmission line, the influence of the damping material on the acoustic impedance seen by the loudspeaker is really very significant.